The Spirit of Mykonos

“… the circle of the Cyclades revolves slowly around Delos, on the stunning sea, in a single movement, like a still dance. This confined and at the same time infinite world of islands appears to be at the heart of the universe.” – Albert Camus
Words:
Rachel Howard

Top + Bottom: In antiquity, Delos was the most sacred of all the Greek islands — but also the wealthiest and most cosmopolitan. The ghostly ruins, covered in monumental statues and stunning mosaics, were once as lively as Mykonos is today.

Surprisingly few visitors to Mykonos make it across the choppy straits to the island of Delos. The mythical birthplace of Apollo, god of sunlight, and his twin sister Artemis, goddess of moonlight, Delos is the mystical talisman around which the Cyclades islands revolve. The political epicenter of the ancient Greek world, it was a religious sanctuary but also a major trading post, a tax haven but also a cosmopolitan melting pot. In its heyday, this little island (just 5 kilometers long and 1.3 kilometers wide) harbored around 30,000 settlers from Athens, Rome, Cyprus, Syria, Egypt, Phoenicia and beyond. Each group of settlers had their own Agora (part market, part gathering place, part forum for civic engagement) and worshipped their own deities. “There is hardly a god who did not plant himself here, introduced by the traders and mariners of the whole Middle Orient,” as Lawrence Durrell wrote.

Over five thousand spectators once thronged the marble amphitheater to attend festivals, plays, and athletic contests on Delos. Jewelers polished precious stones in their workshops and artists fashioned the giant statues and dazzling mosaics that adorned the temples and villas. The erotic art unearthed on this sacred island — Aphrodite suggestively untying her sandals, giant penises on pedestals, a pair of winged phalluses with the inscription ‘one for you, one for me’ — suggests that Delos was also a place of sexual liberation and experimentation. “Once, there was no place richer, more famous, more hallowed. The oldest myths in Greece revolved around this island, whose origins are as dazzling as its name: Delos means the manifest, the brilliant, the luminous, just like the god [Apollo] who was born there,” the French historian Charles Diehl wrote in 1897, not long after the first excavations of this vast archaeological site began.

“The oldest myths in Greece revolved around this island, whose origins are as dazzling as its name: Delos means the manifest, the brilliant, the luminous.”

Until the 1950s, Mykonos was nothing more than a stop-over for archaeologists, academics, and spiritual pilgrims en route to Delos. Barren, windswept, isolated Mykonos was a backwater. There were no roads, only dirt tracks; there was no electricity, apart from a single generator that often sputtered to a halt; running water was a rare luxury. But early visitors — from Roland Barthes to Le Corbusier, Durrell to Camus — instantly fell for the island’s raw natural beauty, sublime organic architecture, and open-hearted locals. Greek society columnists Zachos Hatzifotiou and Eleni Vlachou eulogized the island, unleashing a wave of Athenian socialites and shipowners, musicians and movie stars, who made Mykonos their summer playground.
‍
“What set Mykonos apart were the Mykonians,” Eleni Vlachou wrote. “They do not suffer from any kind of inferiority complex. They look after you with pleasure, let you dress and undress as you please, but that tolerance has nothing to do with coldness or indifference. On the contrary, even the poorest villagers know how to make you feel welcome, with their simple, natural graciousness.” As well as being instinctively hospitable, the Mykonians were innately entrepreneurial. The first bars on the harbor appeared because the night boat never showed up on time. Local fishermen, farmers and builders, endowed with superhuman strength and supercharged charisma, became pioneers of the tourist industry: building the first villas and hotels, taking visitors to far-flung beaches on their fishing boats, or transporting them to church festivals on their donkeys — wild festivities that lasted for three days and nights, whipped up by local musicians on violins and bagpipes.

Greek shipping magnet Aristotle Onassis, playwright Jimmy O’Connor, businessman Alexander Onassis and Isidoros Mavridoglou, the former minister of shipping, pictured at a party together in the 1960s. Photo by Lizy-Manola

“In the swinging sixties, while mini-skirts and marijuana were shunned on other Greek islands, on Mykonos you could wear miniskirts, hot pants, or nothing at all.” 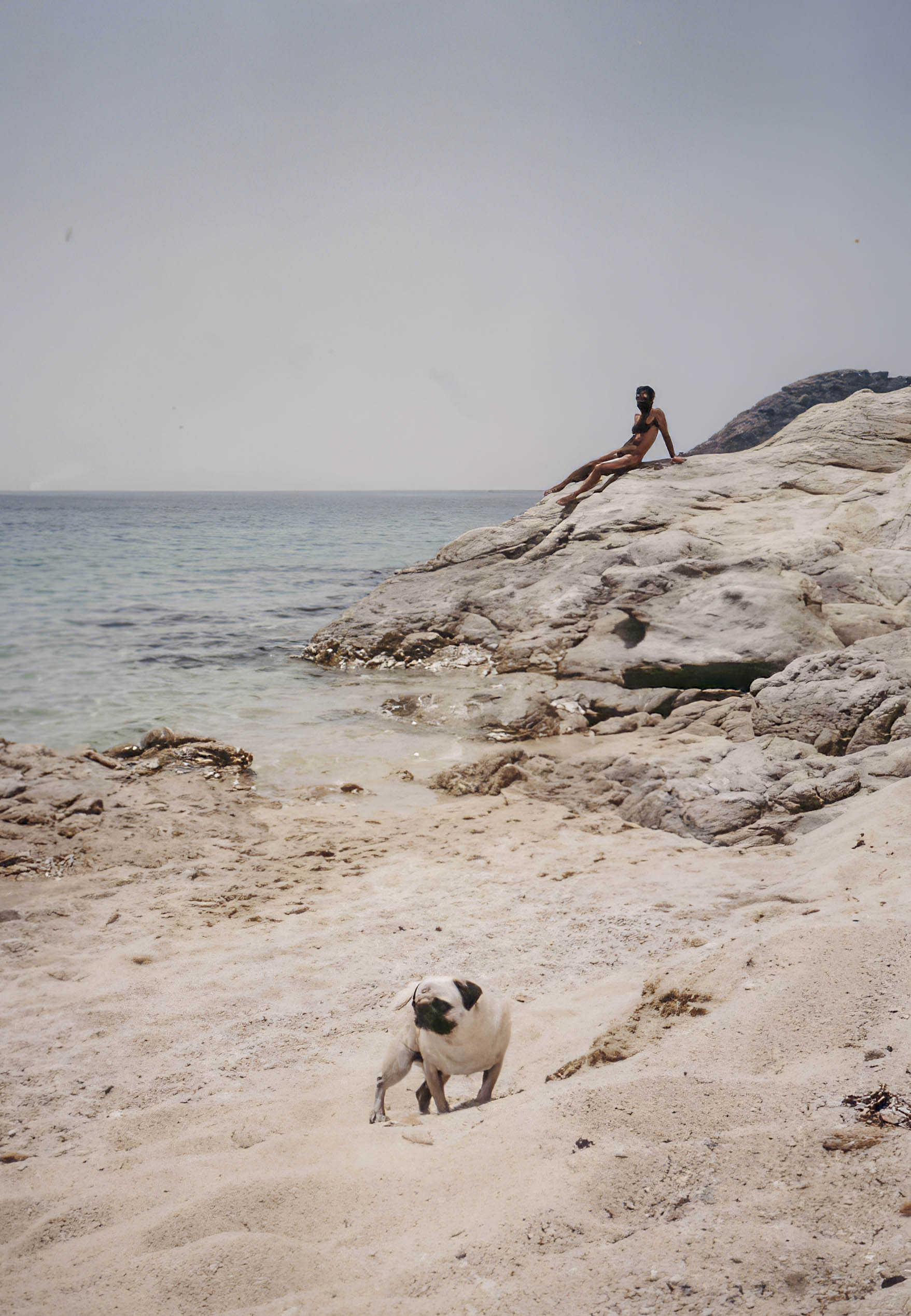 Nudity was the norm on most beaches on Mykonos until the 1990s.

Though deeply religious, the Mykonians were remarkably unpuritanical, their rituals rooted in paganism. Under the influence of the Apollonian melodies and Dionysian revelries that reverberated on Delos, it’s not surprising that Mykonos developed a reputation for unbridled hedonism and bacchanalian nightlife. In the swinging sixties, while mini-skirts and marijuana were shunned on other Greek islands, on Mykonos you could wear miniskirts, hot pants, or nothing at all. A unisex tunic from Parthenis monochrome boutique and a handful of batik sarongs from Loukas ‘Mr Pareo’ Doukas (whose timeless wares are still on sale in Mykonos town) were all you needed at the full moon parties on the sandy beaches of Panormos, Agios Sostis, and Paranga.

The caves between Agia Anna and Paranga, where Scorpios is located now, were the makeshift homes of naked hippies, who summered on Mykonos and wintered in Kathmandu. These free-wheeling nomads were drawn to the metaphysical magnetism of Delos, as well as the open-minded, life-loving spirit of the Mykonians. It was a place where you could shed your inhibitions and just be yourself; local social anthropologist Despina Nazou calls it: “a liminal space, a place of freedom where the rules of everyday life are suspended.” Celebrities and tycoons, fishermen and freaks, debutantes and drop-outs were all part of the Mykonos tribe, coming together in a classless, carnival atmosphere where nobody slept before sunrise. Each clan had their own beaches and bars, but the boundaries were fluid, and everyone was equal under the scorching sun.

“Free-wheeling nomads were drawn to the metaphysical magnetism of Delos, as well as the open-minded, life-loving spirit of the Mykonians”

Top: Piero Aversa, an Italian artist and socialite, who founded the infamous Piero’s bar on Mykonos in 1972.
Bottom: Piero’s propelled Mykonos into the global spotlight as a gay destination. Celebrities, fashion designers, and supermodels squeezed into the bar to watch the legendary drag shows.

Naturally, fun-loving uninhibited Mykonos also lured the gay crowd. The 1970s heralded a flourish of disco and drag queens. Gay bars sprung up in the whitewashed alleys of Hora, where a parade of Eartha Kitt, Barbra Streisand, and Diana Ross impersonators strutted in platform heels. They all vied to be crowned Miss Mykonos, a beauty pageant for drag queens at Piero’s, the most notorious gay bar of them all. The flamboyant owner, Piero Aversa, an Italian artist from New York, chose Mykonos for “its blend of liberal attitudes and puritanical settings”. In an interview with Taki Theodoracopoulos for The Spectator in 1979, Aversa quipped: “When I first went to beautiful Greek islands with my boyfriend, I got stoned. And I don't mean with pot. By the natives. Not in Mykonos, however.”
‍
Piero was the ultimate master of ceremonies. He threw Dionysian dinner parties at the Stoupa Mansion (today the Belvedere hotel), and White Parties at Piero’s, where the whole island showed up in extravagant costumes. As Taki Theodoracopoulos wrote: “Like a modern Moses, Piero waved his heavily braceleted arm and thousands of chic gays followed.” But Piero’s jet-setting entourage also included models, actresses, artists and aristocrats. The front row crowd came to decompress at Piero’s, Psarou and Paradise beach after Paris, Milan and New York fashion week. Gaultier, Mugler, Valentino and McQueen were regular fixtures. Pat Cleveland posed for Billy Bo, Greece’s hottest fashion designer, whose boutique was a magnet for androgynous beauties. Grace Jones stalked the dance floors of Remezzo and Nine Muses, legendary nightclubs on the old harbor of Mykonos. The music from Remezzo’s terraces drifted on the sea breeze as the ferry pulled in after midnight: passengers would jump straight off the boat into the club, stumbling out at dawn to eat spaghetti Bolognese at the Yacht Club next door. Nine Muses was an old warehouse with no roof; after working up a sweat on the dance floor, patrons would dive into the harbor to cool off.

“Celebrities and tycoons, fishermen and freaks, debutantes and drop-outs were all part of the Mykonos tribe, coming together in a classless, carnival atmosphere where nobody slept before sunrise.”

From the early ‘60s to the mid ‘80s, Mykonos underwent a radical transformation - from barefoot kids and no electricity to gold shops and 24-hour nightclubs. You had to step over couples making love on the beach. Even the military dictatorship in Greece, from 1967 to 1974, did not stop the party. When the violinist Yehudi Menuhin returned to his holiday home on Mykonos in 1976, after an absence of nine years, he was appalled to find Mykonos overrun by “naked Beatniks of all sexes”. He wrote to the mayor, lamenting: “your noble Mykonos, where the visitors came for its own uniqueness and its proximity to the sacred island of Delos, has acquired the reputation of a place for all and every kind of decadence.”
‍
Decades later, this decadence is intrinsic to the glamorous allure of Mykonos. But the undercurrent of mystical energy, the cathartic sense of freedom, and the sense of belonging to a nomadic tribe are still thrillingly alive. “However many tourists come with their chatter and their litter, little Mykonos will not let the stranger down,” Lawrence Durrell wrote in 1977. “Its exemplary purity of tone and line will hush them, its island wind alarm their sleep, its black seascape nudge their nerves with the premonition of things as yet unformed and unformulated in their inner natures; perhaps the very things they have come here to experience … It is not cozy, it does not try to charm, it brands you like a hot iron.” In that sense, nothing has changed on Mykonos since its heady bohemian heyday.